The Tillamook Estuaries Partnership (TEP), a 501(c)(3) non-profit organization, is a part of 28 National Estuary Projects working throughout the United States and in Puerto Rico to protect and restore the health of estuaries while supporting economic and recreational activities.

In 2019, TEP will be celebrating the 25th Anniversary of TIllamook Bay's designation as  "Bay of National Significance" and the establishment of the Tillamook Bay National Estuary Project (TBNEP) on July 1, 1994.  Since then, TEP has expanded its project area to include all of the bays and watersheds in Tillamook County.  Working diligently with its many partners, TEP looks forward to another 20 years of implementing and monitoring TEP's Comprehensive Conservation and Management Plan (CCMP) aimed at addressing some of our bays biggest challenges: loss of key fish and wildlife, decreasing water quality, increased erosion and sediment deposition, and the increasing magnitude and frequency of flood events.  WIth an increased focus on education and enhancing citizen involvement and stewardship, together with its partners and the community, TEP will be successful in solving these challenges. 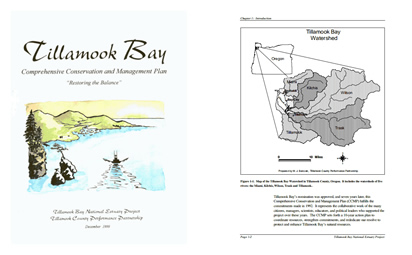 Everything you ever wanted to know about TEP's Comprehensive Conservation and Management Plan. more 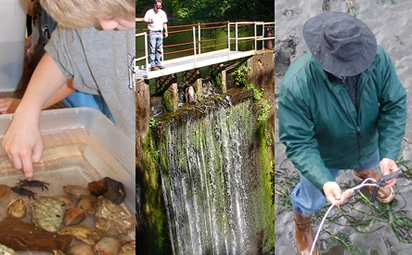 We have been working hard to protect and restore the health of our estuaries. Take a look at some of our accomplishments. more

Incorporated as a 501(c)(3) in the Spring of 2002, the TCPP was renamed Tillamook Estuaries Partnership (TEP). The new name reflected TEP's plan to not only assist partners in other areas of the county, but also to take lessons learned in Tillamook Bay and transfer them to the county's four other estuaries.

TEP recently updated its CCMP to reflect the work that has been completed, actions that are still in progress, and emerging issues.  This process included the opportunity for TEP's partners and the community to celebrate the many successes in the watersheds and re-engage in the efforts that will be necessary over the next ten years to move towards healthy bays and watersheds.

After the TBNEP's establishment in 1994, the Management Conference convened to establish a process that merged scientific research and public input to develop a scientifically-defensible, community-supported resource management plan for the basin. This research and planning phase lasted over four years and resulted in the development of the Comprehensive Conservation and Management Plan (CCMP).  The CCMP establishes partner commitments and coordinates resource allocation for implementation of 63 actions targeted at four priority problems affecting Tillamook Bay and its watershed: water quality, habitat loss and simplification, erosion and sedimentation, and flooding.

TBNEP's moved into its Implementation Phase on December 14th, 1999 with the approval of the CCMP by EPA administrator Carol Browner. Oregon Governor John Kitzhaber recognized the importance of the TBNEP and signed the plan in August of the same year. Upon approval of the CCMP, the TBNEP shifted from a research and planning organization into an entity dedicated to implementing the CCMP. Its 63 actions identified the steps that local, state and federal partners would undertake to address the basin's major natural resources issues.

In its first two years, the organization was a department of Tillamook County.  The role of the TBNEP, which was renamed the "Tillamook County Performance Partnership (TCPP)"), was to lead and facilitate implementation of the CCMP. The purpose of the TCPP, as stated in its bylaws at the time, "[was] to provide a dynamic, results driven mechanism to build relationships, promote economic sustainability, and facilitate coordinated environmental restoration within the County."  This mission resulted in the eventual re-organization of the TCPP to become a non-profit in 2002.

Tillamook Estuaries Partnership is a nonprofit organization dedicated to the conservation and restoration of Tillamook County's watersheds through active stewardship, scientific inquiry, community engagement, and education.