The World English dictionary provides the following definitions for “conserve” and “restore”: to protect from loss or harm and to bring something back to an earlier or better condition.  Conservation and restoration of our county’s watershed are the foundations of the work TEP does and sometimes seems unattainable in the context of the preceding definitions.  But it is our mission and through our programs and with the support of partners, volunteers and residents, TEP is making significant progress towards resolving some of the priority problems identified by our community supported management plan. The following synopses shine a spotlight on TEP projects that embrace the meanings of “conserve” and “restore” and put them into practice. 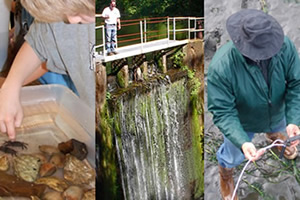 We are proud to announce, in 2012 the Tillamook County Water Trail (TCWT)  received National Recreation Trail (NRT) designation! Facilitated by the Tillamook Estuaries Partnership (TEP) as part of the Education Program, the (TCWT) consists of 250 miles of navigable waters for non-motorized enthusiasts, including the five estuaries within the County.

The National Recreation Trails program recognizes exemplary trails of local and regional significance. The program goal is to promote the use and care of existing trails and stimulate the development of new trails to create a national network of trails. In 2012, 54 new trails received an NRT designation, and the TCWT was included in this group as the only Oregon trail earning this honor.

The State Land Board Awards were established in 2004 to recognize worthy projects and efforts that promote responsible, sustainable stewardship of state resources or benefit Department of State Lands-related programs. The TEP is honored to have received this award in 2008 for the 'Coal Creek Dam Removal' and in 2010 for the 'Miami Wetlands Enhancement' project.

The restoration project in the Miami River watershed restored ecological functions throughout 44 acres of tidally influenced wetlands. Since approximately 85 percent of Tillamook Bay’s wetlands are now lost, the project is significant in helping restore habitat for five species of salmonids: Coho, Chinook and chum salmon; and steelhead and cutthroat trout. Nearly 25 partners, including two private landowners, an advisory committee, and numerous local, state, federal and tribal entities collaborated on the project.

In 2008 Coal Creek, a tributary of the Kilchis River, was  restored to its historic channel, by removing an old 30' high dam. Since, significant improvements to the creek have already been observed, including spawning salmon and gravel movement.