How Does TEP Celebrate? 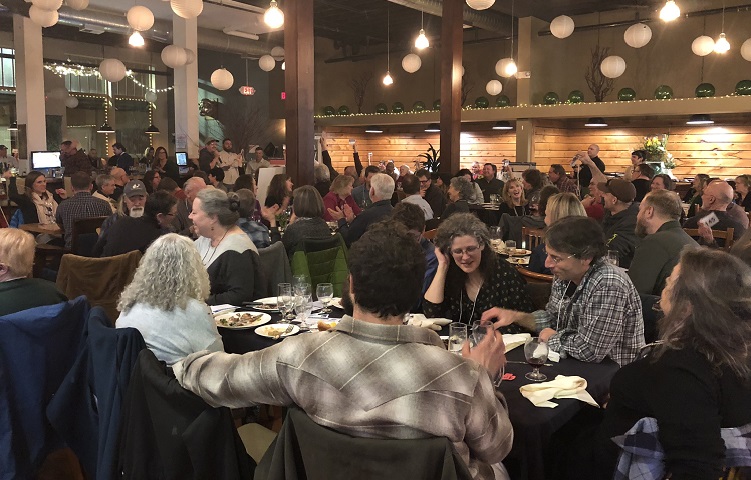 To celebrate its 25th anniversary, Tillamook Estuaries Partnership hosted a fundraising dinner ‘Celebrate the Bounty of our Bays’ on Feb. 23 at Pacific Restaurant to showcase the work we've been doing over the last two and a half decades.

“Twenty-five years ago Tillamook Bay was designated as a Bay of National Significance by the Environmental Protection Agency, which did two things,” said Kristi Foster, the Executive Director of TEP. “It secured Tillamook Bay’s spot in the National Estuaries Program, which works to protect and restore the water quality and ecological integrity of 28 estuaries, and it also gave birth to the Tillamook Estuaries Partnership.”

Traditionally, TEP has hosted a fishing tournament each year as its main fundraiser, but this year decided to switch it up and instead hosted a surf & turf dinner and silent auction and presented their 2018 Year in Review.

“We saw a lot of new faces which was fantastic,” said Foster. “One of our goals with this new venue and format was to widen our audience and be able to ’friend-raise’, so it was exciting to see that happen.”

More than 150 people were in attendance and helped raise more than $29,000 for TEP’s different projects and programs that support clean water, abundant wildlife, healthy habitats and vibrant communities.

“There’s a lot of energy and support around the natural beauty of Tillamook County’s estuaries, bays and forests,” Foster said. “People really love it and we saw that support shine through the participation during our event.”

“Leo's years of service to Tillamook Estuaries Partnership programs created immeasurable results in our local community and made a lasting impression on the hearts of all he worked with,” Foster said.

Leo also dedicated his time to TEP’s native plant nursery, education programs, and as a volunteer with many partner organizations. Leo passed away on Jan. 31 after a battle with cancer. The award was presented to his son, Thomas Adams.

Lenora Lawrence was also recognized as the Guest of Honor. Lenora first started attending board meetings for what was then known as the Tillamook County Performance Partnership after she learned about the declining salmon populations in the mid-90s. Lenora's desire to take action led her to become one of 19 original board members. With a strong belief in the partnership's mission, Lenora dedicated herself to the work and helped guide TEP as it became a non-profit in 2002. Through the years she has been an integral part of the organization, dedicating much of her time to TEP’s environmental education programs, outreach events, and helping wherever she can. Marketing and promotions for this event are partially funded by Visit Tillamook Coast and the Econimic Development Council of Tillamook County.

Please wait while we submit your request.

Looks like you've already signed up with this e-mail address. If you'd like to view or edit your current profile, please click here, and we will email you a link to your personal profile page.

We email this link to you to ensure that only you have access to your profile page.

Thank you - an email has just been sent to . Once you receive this email, simply click the provided link as instructed.

Thank you - a confirmation email has been sent to . In order to complete the sign-up process, you need to verify your email address by clicking on the link sent to you in that email.